The following memories have been sent to us by Eric Morris, who was brought up and lived in Killamarsh and now lives in Kent.

We recently featured the article in the January issue of Doorsteppa.

After recently watching the T.V. programme – The Last Miners – about the closure of Kellingley Colliery in Yorkshire, these are my thoughts prompted by the programme.

I worked at Westthorpe Colliery between 1967-1975 where I was an electrician – not a very good one – so I got out of the pit at the earliest opportunity. However, as the cliché goes – you can take the lad out of the pit – but not the pit out of the boy … He is still in there all these years later. 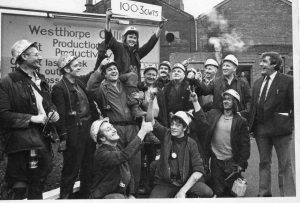 Back to the programme – I watched it out of curiosity because it’s over forty years since I left Westthorpe – but it bought back so many memories – thoughts and feelings I had taken for granted for many years.

The first point is that at Kellingley they were working in seams some 10-12 feet high – luxury!  This is not to decry the Kellingley men – but it made me realise how hard it was to be working in the Flockton and Thorncliffe seams at best 5 feet high. Allowing for the face supports – this meant we crawled everywhere. The Thorncliiffe seam was also at about 45 degrees so we had to crawl backwards – slamming your battery and tools in someone’s face!  Standing up was a luxury waiting in the main and tail gates.

Having said that, as an electrician I came and went on the face – not spending much time there – so I reflect back in awe at people like Harry Tongue who worked shift after shift on the face – working in perpetual dust and soggy knee pads from the water that was there to suppress the dust! I remember Harry ranting to the head fitter about having a choice of pneumoconiosis or arthritic knees – some choice.  Harry had a way of getting his point across – and he was right.

Another point was that on the last shift I worked at Westthorpe I was waiting with some other colliers from the night shift when they struck up an impromptu tune and song – such fun, such camaraderie.

I was pleased to leave Westthorpe to go teacher training – such a contrast! But I did miss that camaraderie – but not the work. People ask me why I left – my reply is that it was dirty, dangerous and unhealthy work – and I was rubbish. Four good reasons [on their own] to leave.

But the Kellingley programme reminded me of that teamwork – that camaraderie – and sense of fun – it took the programme to remind me how important Westthorpe was in my life.

I like everyone to appreciate those special men who were miners at Westthorpe and High Moor – and everywhere.

One thought on “MEMORIES OF A MISFIT MINER”