Today we commemorate the centenary of the start of the battle known as Passchendaele.

Mr Jack Walker has asked if we could include on the website details of his uncle Joe Walker who was killed in action on 17th September 1917 – 100 years next month. 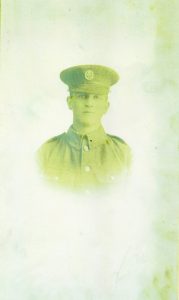 Born in Killamarsh in 1894, the son of Robert and Elizabeth Walker, Joe lived at Highmoor and later at Norwood. The 1911 census shows that he was employed as a ‘Colliery pony driver underground’, probably at Norwood pit.

After the outbreak of war in 1914, Joe walked to Sheffield with his Killamarsh pals in order to ‘join up’.

He was enlisted into the York and Lancaster regiment on 29th August 1914.  Joe was trained at Pontefract, Yorkshire with the 3rd (reserve battalion) York and Lancs.

Posted to France with the 7th Battalion York and Lancs.

Returned to France posted to 8th Battalion York and Lancs.

Appointed Lance Corporal in the field.

Wounded and sent for treatment

Joe survived the battle of the Somme, only to lose his life a year later in 1917.

He is commemorated on the Tyne Cot memorial at Passchendaele, Belgium on panels 125 to 128 in the south rotunda of the memorial.