The photograph below has been sent to us by Roger Monk.  He is asking if anyone can tell him where the photograph was taken please. 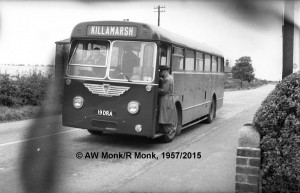